Our final trip of the year was a little car ride (little for us anyway) to Illinois and Indiana. We had originally planned to start this trip on a Saturday morning, then drive a little over 10 hours to our destination. But instead we chose to leave on Friday night to knock four hours off Saturday's drive.

Our destination Friday night was Champaign, IL. We took a rare direct route for us and arrived at the Hyatt Place sometime around 11:00. While my fiancée stayed in the room, I drove a mile down the road to stop in a bar and see an old friend of mine playing in a karaoke band. I spent about an hour there, made plans to meet him for breakfast the next day, then headed back to the hotel to sleep.

On Saturday morning we met my friend at his bar/restaurant for breakfast. If you're ever in Champaign be sure to visit Boomerangs! We left around 1:00 and began our new county quest. We headed east on I-74, then went south on HWY 49. Near the tiny town of Allerton we headed one block into it, and entered Vermilion County. We then turned around and continued south on HWY 49. A few miles later we crossed into Edgar County. 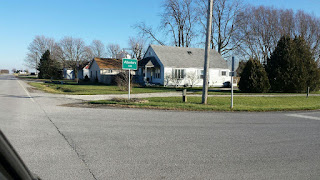 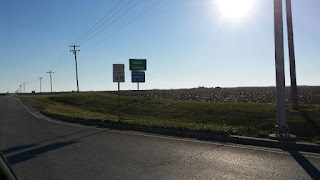 We continued a mostly southerly route, crossing into Clark and Crawford Counties on the way. At the city of Hutsonville we crossed the Wabash River and entered into the state of Indiana and Sullivan County. We continued south picking up Knox County. Within the city of Vincennes we crossed the Wabash River yet again, this time going back into Illinois and picking up Lawrence County. From there we turned around and went back into Indiana. 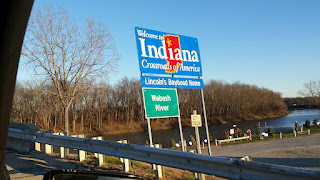 We headed south on HWY 41 entering a couple of counties we’d previously been in. But once we got onto I-64 and headed west we crossed into Posey County, our last Indiana County for the trip. Crossing the Wabash River once again we entered Illinois and White County. As we headed north we entered the small town of Grayville. We took a right turn, traveled about a mile, crossed a small bridge (over a run-off from the Wabash River) and found ourselves on a dirt road – and Wabash County. This was our 500th new county of the year. From there we turned around and went back. Once we got on the main road going north again, we crossed into Edwards County a block later.

From there we put our hotel in the GPS. We spent the night at the Comfort Inn & Suites in Champaign. On the way back we drove through Richland and Jasper County. We ended up getting dinner at Monical’s Pizza in Tuscola. And like the night before, before going to bed, we drove to the city of Clinton to see my old buddy performing with his karaoke band at Snapper’s Bar & Grill. And this time, in spite of a head cold and throaty voice, I got up and sang two songs with him – which was very cool!This little weekend getaway ended up netting 13 new counties, bringing our yearly total to 503. Our grand total now stands at 1265. Although I hope I’m wrong, it’s probably safe to say we’ll never have another year as productive (county-wise) as 2015.

So what’s next? Well we do have a wedding to go to in January. It’s in the St. Louis area. There are a couple of nearby counties in Missouri that we haven’t been to yet that we might possibly drive to just because – just because that’s what we do. We also have an Alaskan cruise scheduled for August. But beyond that, there is nothing planned. Yet. Stay tuned!


7/17/17 UPDATE: We recently realized that in putting our county list together, we had inadvertently failed to include two counties that we had previously entered. On a summer, 2014 road trip, we went to Disneyland in California (Orange County). And upon leaving Disneyland for Las Vegas, we entered Riverside County as well. So even though it says 1265 total counties in this post above, the actual number at the time was 1267.
Posted by TWORIVERSWALRUS at 1:12 PM No comments: