In February, we took a 10-day island-hopping trip to Hawaii. We left Milwaukee early Monday morning. The second leg of our flight was delayed for over three hours in Las Vegas, so we ended up arriving in Honolulu (Oahu County) pretty late. We picked up our Chrysler Pacifica minivan, drove straight to our hotel, the Hampton Inn Oahu/Kapolei, and went to bed.

On Tuesday, we were ready to start our Hawaiian trip in earnest. Our first activity of the day was a visit to Pearl Harbor. We were part of the first tour of the day. After Pearl Harbor, we drove to the southeast part of Oahu, then followed the coast on up. We made stops at the Lanai Lookout, the Halona Blowhole Lookout (which wasn’t blowing much that day), Waimanalo Beach, and the Byodo-In Temple. After lunch, we drove to the Kualoa Ranch and took their ATV Tour. The tour led us into valleys where several movies (including Jurassic Park) had been filmed. After the tour, we drove to the north shore of the island and stopped at Waimea Bay Beach Park to watch the surfers ride the big waves. From there, we drove back to our hotel.

On Wednesday, we drove along the western coast of Oahu until the road ended, and then we turned around and drove to the airport to hop a flight to Kauai. Upon landing, (Kauai County) we picked up our Buick Enclave and headed to our resort – the Grand Hyatt Kauai—and grand it was! I highly recommend this resort. We were upgraded to oceanfront rooms and treated to the sight of passing whales from our hotel room.

On Thursday, we drove to Eleele and hopped on a Capt Andy's boat for a sunset dinner cruise up and down the Nā Pali Coast. The sights on this cruise are indescribably amazing. 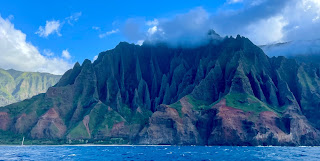 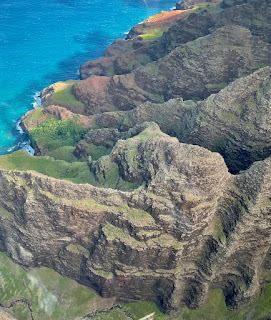 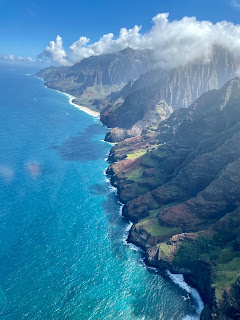 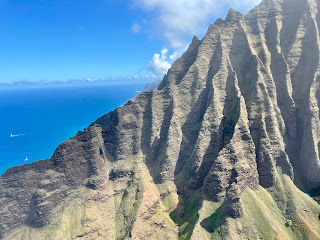 On Friday, we took a Blue Hawaiian Helicopter tour, which was the highlight of our vacation. It took us over the entire island, showing us waterfalls, Waimea Canyon, and the Nā Pali Coast again. Later that day, we drove to Waimea Canyon State Park and Kokee State Park to get a less-elevated perspective. That evening, we changed hotels and checked into the Hilton Garden Inn Kauai Wailua Bay.

On Saturday morning, we returned to the airport to take another flight—this time to the island of Maui (with an Oahu stop on the way). We picked up our brand new Chrysler Pacifica minivan (only 9 miles on it!) and drove to the Courtyard Maui Kahului Airport, our hotel for the night.

On Sunday, we drove the famous Road to Hana. Along the scenic drive, we stopped to spend time at Wai'ānapanapa State Park and set foot on the famous Black Sand Beach. From the beach, we drove into Hana for lunch. After eating, we checked into our hotel, the Hana Maui Resort. Interestingly, our room did not have air conditioning or a TV—they have a more relaxed “old school” feel—but they did have Wi-Fi!

On Monday morning, we drove south and visited Haleakala National Park, where we hiked the Pīpīwai Trail to the bamboo forest. While most tourists who take the Road to Hana turn around and go back once they reach the end, we continued in the same direction and went around the southeast side of the island. Initially, the roads are very narrow, but they eventually open up to a more normal highway. This happens to be my favorite place in all of Hawaii—it’s quiet and isolated, and tourists are few and far between. If you ever want to have a little piece of Hawaii to yourself, this is the place to go. Near mile marker 28 and the Manawainui Gulch, I buried a note near a large rock. Maybe someone will find it someday. Or maybe I’ll retrieve it myself on a future trip. On Monday afternoon, we took our final island hop and landed on the Big Island (Hawaii County). Our home for the next three nights was the Kohala Suites by Hilton Grand Vacations.

On Tuesday, we drove across the island on Saddle Road to Volcanoes National Park. While there, we walked through the Thurston Lava Tube and drove the Chain of Craters Road. After visiting the park, we continued around the island, stopping at Punalu'u Beach and Pu'uhonua O Honaunau National Historical Park.

Wednesday was our last full day on the island. Early in the afternoon, we drove south to the Kaloko-Honokōhau National Historical Park. Before finding the main entrance, we used a different entrance that featured one of the worst roads we’ve ever traveled—which says a lot! From there, we continued into Kona for a brief drive down Ali’i Drive. Later that afternoon, we drove north from our resort, stopping briefly at the Pu'ukohola Heiau National Historic Site and the awesome Waipi’o Lookout—childhood home of King Kamehameha. Our final two stops of the day were a couple of waterfalls: Akaka Falls and Rainbow Falls.

On Thursday morning, we got up early to catch our flight back to the mainland. Due to weather issues back home, we didn’t land in Milwaukee until after 4:00 in the morning. It was a long final day to end a long, fantastic trip. Along the way, we picked up three new counties. So, what’s next? We have a Memorial Day weekend trip planned for Iowa and Nebraska, a summer trip to Florida, and a September trip through the Dakotas. Stay tuned!