In late April we decided to take a little weekend getaway to the Florida Keys. We had less than two full days in Florida. So our time was limited. Nonetheless we covered a fair amount of ground.

We flew into Fort Myers, arriving about 9:30 at night. We had a 2.5 hour drive to get to our hotel in Homestead. The airport was in Lee County. The route itself passed through Collier, Broward, then finally Miami-Dade counties. We arrived at the Hampton Inn & Suites around midnight. So even though the majority of the drive went through the Florida Everglades area on I-75, we couldn’t really see much of it.


The following morning we set out for our desired destination: Key West. It’s a beautiful drive down HWY 1. The entire Florida Keys are in Monroe County. Thus it was the only new county for us that day. The first city you hit is Key Largo. And it’s nearly impossible to not start singing the Bertie Higgins song as you’re passing through. “Here’s lookin’ at you kid…” 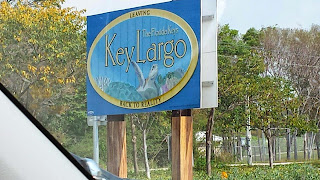 Key West is the end of the road. You know it from the mile marker zero. The chaos of Duval St. also tells you you’ve arrived. 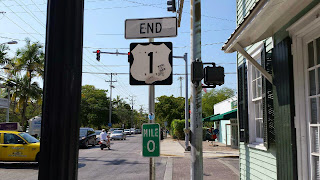 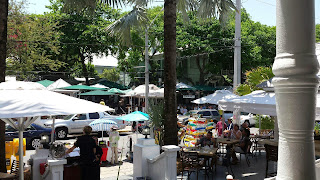 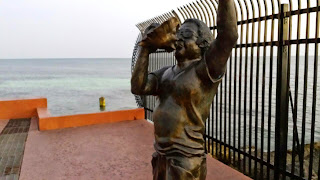 We spent one night in Key West at the Best Western Key Ambassador Resort, then had to drive back to Fort Myers for an evening flight. Did we drive directly to the airport on the same route back? Of course not! We had seven more counties to hit! This time instead of getting back on I-75 we went north toward the small cities of Belle Glade and Pahokee. Both places are in Palm Beach County. We stopped in the Belle Glade McDonald’s for a quick bite to eat. Our route then continued north on HWY 98, hovering right next to Lake Okeechobee.  Eventually we hit the Martin County line. Both of these counties are fairly common visits for county collectors. But I’m guessing that few of us enter them where we did. 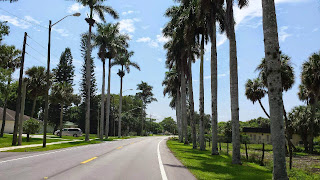 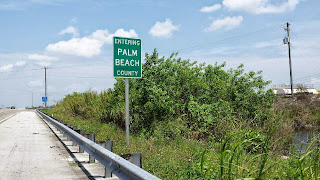 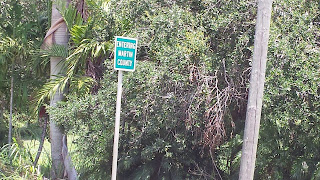 We turned around and headed back to Pahokee, going through it and continuing to follow the Lake until we were headed west toward the city of Clewiston. Considering that we drove right next to about 1/3 of the entire Lake, we were amazed how little of it can actually be seen from the road. There’s a bluff that rises higher than the road almost the entire way. A few miles before hitting Clewiston we entered Hendry County – one of the rarer counties for county collectors to hit. The same can be same for Glades County (which we hit next) just to the north of it. By this point we were on HWY 80 headed west. Unbeknownst to us the road actually barely crossed into Glades County. But just to “be sure” we turned on HWY 27 north toward Moore Haven, went about the equivalent of a city block, then turned around. But thanks to this little side trip we were able to snap a picture of the county sign. 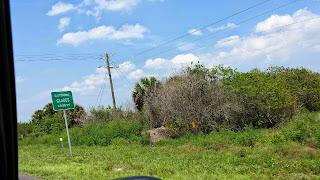 At this point we put Sarasota in the GPS. Once we hopped on I-75 we crossed into Charlotte, DeSoto and Sarasota Counties. Our time in DeSoto County was very brief – perhaps only 1000 feet before the Sarasota County line. But I still managed to get a picture of the county sign. Sarasota County was our last new county of the trip. And once we hit it we had to go another five miles before we were able to get of the interstate and turn around to go back toward the airport. 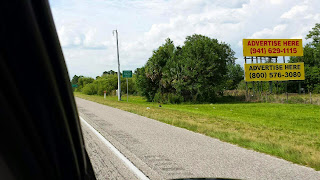 Our weekend getaway netted 12 new counties, completing the entire lower third of Florida, and giving us 117 new counties for 2015. Our grand total now stands at 879. What’s next? A Montana road trip awaits us over Memorial Day weekend. We’ll see you then!


7/17/17 UPDATE: We recently realized that in putting our county list together, we had inadvertently failed to include two counties that we had previously entered. On a summer, 2014 road trip, we went to Disneyland in California (Orange County). And upon leaving Disneyland for Las Vegas, we entered Riverside County as well. So even though it says 879 total counties in this post above, the actual number at the time was 881.
Posted by TWORIVERSWALRUS at 9:55 AM