FINISHING MICHIGAN WITH A VISIT TO HELL!

The second weekend of October found us on a mission to complete our third state. So on Friday night we set out for the U.P. We got as far as Escanaba, where we spent the night at the Sunset Lodge Motel. As far as we could recall, this was the first time we’d ever spent the night at a motel. They had actual keys! And in spite of its somewhat rustic appearance, the motel was incredibly well-kept and up to date. And the staff was incredibly friendly as well. As it turns out it’s the #1 rated hotel (motel) in Escanaba. It’s well earned. We can’t recommend it enough. And you can’t beat the price. 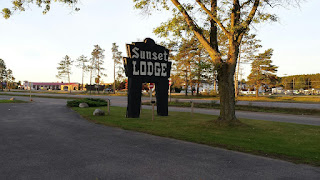 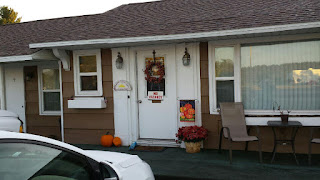 On Saturday we got up and out the door by 8:30. After a brief stop for a McDonald’s breakfast, we headed north on Highway 2, following the northern shores of Lake Michigan, and crossing into  both Schoolcraft and Mackinac Counties – our first new ones of the trip. From there we headed north to pick up the elusive Luce County. We then picked up Chippewa County on the way back down towards the Mackinac Bridge. 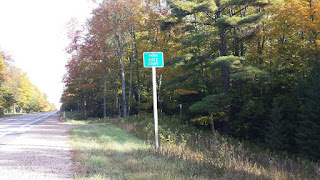 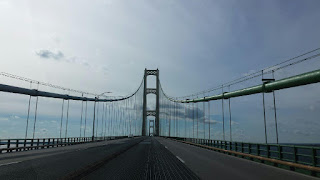 Once we crossed the bridge on I-75 we found ourselves in Emmet County. Continuing south we entered Cheboygan County about 1.5 miles later. We stopped in Indian River to fill up on gas and get a quick lunch at Burger King. From there we headed east on HWY 68/33, into one of the least-visited areas in Michigan for county collectors. We immediately picked up Presque Isle County – where we found a giant head of George Washington near the town of Onaway. Then we headed south, picking up both Montmorency and Alpena Counties. Generally speaking when we do a quick “turnaround” in a very rural area, we never see a county sign. But Alpena one! (Notice the dirt road.) 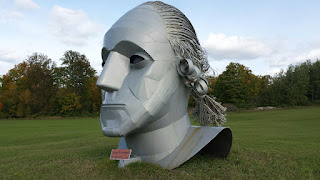 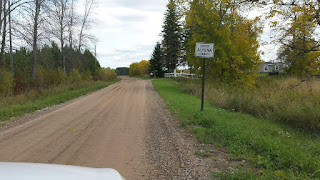 We continued with a southerly route, picking up Oscoda, Alcona, Iosco Ogemwa, Arenac and Bay Counties. By this time we had hooked back up with I-75. But somewhere near the city of Pinconning we had to get off and head west a few miles to pick up Gladwin and Midland Counties. We then looped back to I-75 and continued south. Near Bay City we got off the interstate and headed east on HWY 25. We picked up both Tuscola and Sanilac Counties before we hit HWY 53. We drove north on it for one mile to hit Huron County. We then turned around and went south and picked up Lapeer County. 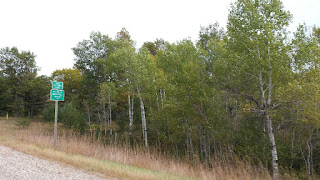 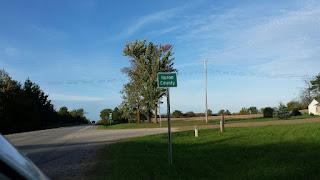 From there we headed south and east for a little “off roading.” This is where the phrase “no county left behind” becomes very accurate. We worked our way through the small town of Allenton, picking up both St. Clair and Macomb counties along the way. We then weaved our way through some back roads, before heading due west for eight miles on what was no more than a dirt road with occasional pot holes. But our destination was the northeastern tip of Oakland County. And after those eight miles we were able to make a left turn to get into it and say we were there. From there we put our Flint hotel (The Courtyard Flint) in the GPS and went right to it. In doing so we entered Genesee County – our 25th new county of the day. For supper we picked an Italian place called Italia Gardens. The spaghetti sauce was very flavorful. And in spite of it being an Italian place, I highly suggest getting some ribs. They’re fantastic! And if that isn’t enough, the bathroom has a Three Stooges motif! 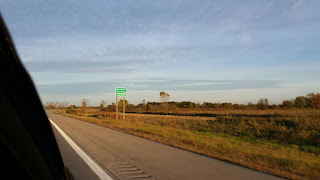 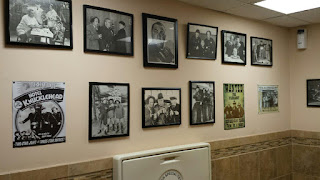 On Sunday we had a quick breakfast at Bob Evans Restaurant, then headed south on HWY 23 out of Flint. Before long we entered Livingston County. From there we took a detour because we wanted to go to Hell. But since we were going to Hell we stopped to see Jesus first. We got off the highway and found a church with a quick photo opportunity with Jesus. We took full advantage of it, including putting a pair of sunglasses on him. From there we went west a few miles and stopped to get gas in Pinckney. We then went a few miles south to cross into Washtenaw County before turning around heading into the very small town of Hell. In a matter of minutes we saw both Jesus and Hell. It was quite a day. Apparently lots of people like to get married in Hell. So there is a very small church in town. 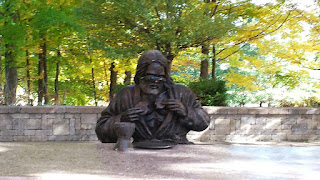 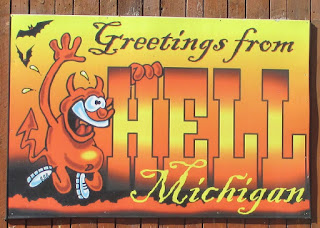 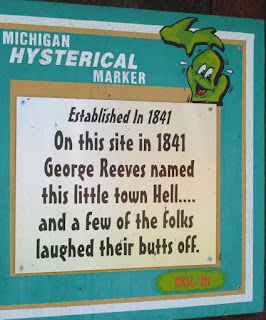 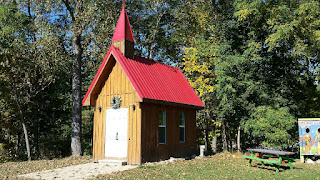 We continued west, picking up both Ingham and Jackson Counties, before finally getting back onto the interstate. We followed I-94 into Calhoun County. We then headed north and west, picking up both Eaton and the rarely-visited Barry Counties. From there we went south through Battle Creek, found I-94 again, and headed west right into Kalamazoo County – where there was a perfect photo opportunity right by the exit ramp before hitting it. And with Kalamazoo County finished, we had completely finished off the state of Michigan. A few months earlier we’d only been in 13 of Michigan’s counties. We visited the last 70 (in three trips) very quickly. 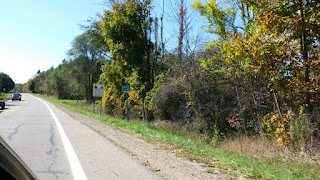 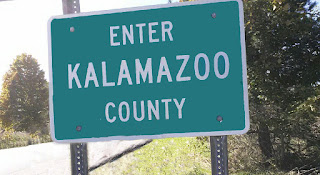 Our trip was not yet done though. We decided to seek out a bizarre statue entitled “The Committee” which rests on the Western Michigan University Campus in Kalamazoo. The students simply refer to it as “Face Full of Crotch.” Once we left there we also found a “Dinosaur Farm” near the city of Coloma. 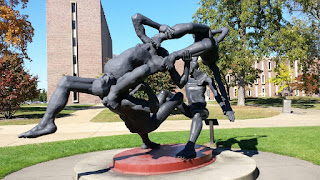 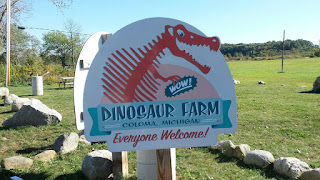 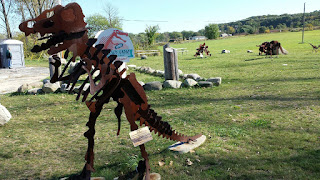 We then left Michigan and headed home. All in all we visited 33 new counties and completed our third state. What’s next? We have a weekend getaway planned for Texas and New Mexico next month that covers a lot of ground. We’ll see you there!


7/17/17 UPDATE: We recently realized that in putting our county list together, we had inadvertently failed to include two counties that we had previously entered. On a summer, 2014 road trip, we went to Disneyland in California (Orange County). And upon leaving Disneyland for Las Vegas, we entered Riverside County as well. So even though it says 1191 total counties in this post above, the actual number at the time was 1193.
Posted by TWORIVERSWALRUS at 1:00 PM