Save for a wonderful trip to Maui two months earlier, we hadn’t taken a true “county collecting” trip in 19 months. (Damn pandemic!) But we finally got back into it with a trip to the west coast, which saw us “finish” Washington, California and Oregon.

We flew out of Minneapolis and touched down in Seattle, late Saturday morning. We picked up our Kia K5, and set off for Spokane! Most people would hop on I-90 and head east all the way. But not us. Although we did hop on I-90 to hit our first new county (Kittitas). Shortly after, we turned onto HWY 97 and headed north into Chelan County. The temperature reached 105 degrees as we stopped for snacks at an IGA in Cashmere. On HWY 2 we drove into Sunnyslope, crossed the Columbia River (for the first of many times on this trip) and landed in Douglas County. We continued on HWY 2, crossed Banks Lake and entered Grant County. From there we went north on HWY 155, found the Coulee Dam and entered Okanogon County. We then set out for Ferry County, just a bit to the east. We didn’t realize that the county lived up to its name. In order to get to where we were going, we would need to take a short ferry across the Columbia River. Needless to say, the ferry wasn’t there. We wondered if it ever was. So we had no choice but to double back. As the sun set, we found our way to Nine Mile Falls – a suburb northwest of Spokane. We crossed into Stevens County, turned around, and headed straight to our hotel, the Hampton Inn & Suites Spokane Downtown South. The ferry experience cost us some time. But it left us with memories!

On Sunday we had a long day of traveling in the middle of nowhere. There weren't a ton of sights to see. But we made the best of it.

We headed southwest on I-90 towards Kennewick. We then went west on I-82 and crossed into Yakima County. At HWY 97 near Toppenish we went south and crossed into Klickitat County - our last county in Washington, and 19th completed state overall. Near the Oregon border we had a surprise stop at Stonehenge (no, not THAT Stonehenge). This was the Maryhill Stonehenge, a replica which was dedicated to the fallen WWI soldiers of Klickitat County.

After Stonehenge we crossed the Columbia River into Oregon, and set foot in Sherman County. We then drove a few miles west on I-84 in order to pick up Wasco County. From there we turned right around, went east and picked up Gilliam County. At Arlington we went south on HWY 19 and stopped off on the side of the road to see one of the locations of the famous Oregon Trail. There wasn't much to see. But we saw it! We then headed east and crossed into Morrow County. From there we went south and picked up both Wheeler and Grant Counties. We stopped briefly at the John Day Fossil Beds National Monument, and toured their museum. From there we headed across the state all the way to Eugene. Along the way we drove through Crook, Deschutes, Jefferson, Linn and Lane Counties. As we drove through the last two counties, our route took us through the Willamette National Forest. Forest fires were raging at the time. And although we couldn't see them, the smell was definitely in the air. After about 12 hours in the car, we finally made it to our hotel - the Home2 Suites by Hilton, Eugene Downtown.

On Monday we set out for Crater Lake National Park. We went south on I-5, driving through Douglas and Josephine Counties. At Grants Pass we went northeast straight to Crater Lake, picking up Jackson and Klamath Counties. We spent some time at Crater Lake - which was quite impressive, in spite of the cloudiness we encountered.

From Crater Lake we went south, crossing into California (and Siskiyou County). Right after crossing over we stopped at the Tule Lake National Monument, and were given a brief (but thorough) history of the Japanese internment camp that existed there during WWII. We then went a few miles south and discovered Lava Beds National Monument. Near as we could tell, the place was empty - save for us. We put on our head lamps and immediately went down into the caves for a little spelunking. Once we left the caves, we got onto HWY 299 and went straight to our hotel in Redding (Shasta County). The closer we got to Redding, the stronger the forest fires smelled. The air quality in Redding was awful, as the thick scent of smoke was everywhere. We spent the night at the Hampton Inn & Suites Redding.

On Tuesday we started our day by heading west to reach Trinity County. This took us in the direction of the forest fire. But the road was open far enough to reach our destination, which we did. We then turned around and went back. At Redding we went south on I-5, and away from the forest fires. We crossed into Tehama and Glenn Counties. And at Hamilton City we crossed the bridge into Butte County - childhood home of Aaron Rodgers. (We didn't see him.) We then circled around the Mendocino National Forest until we reached the city of Ferndale. Along the way we picked up Colusa, Lake, Mendocino and Humboldt Counties. We also stopped on the side of the road for a break. While there we noticed some sort of painted alligator that someone had attached to the rock. Very odd. At Ferndale we made several stops to take pictures of film sights. Stephen King's "Salem's Lot" was filmed there. Being a big fan, I had to stop and take a few pictures. As we left Fernwood we headed straight north to Eureka, where we caught our first glimpse of the Pacific Ocean as well. We spent the night at the Holiday Inn Express & Suites Eureka. We had dinner at Luzmila's, a Mexican restaurant just down the road from our hotel.

The Marsten House, as seen in the film, and as seen today. 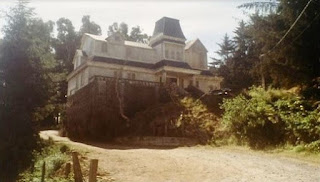 Barlow's Antique Store, as seen in the film, and as seen today. 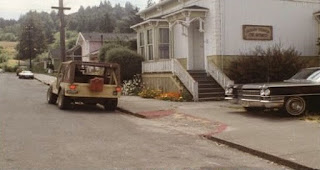 Crockett Realty, as seen in the film, and as seen today. 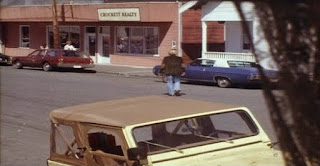 Ben Mears' boarding house, as seen in the film, and as seen today. 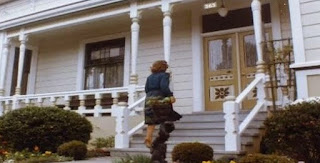 The church where they got the holy water, as seen in the film, and as seen today. 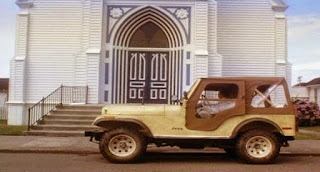 The cemetery, as seen in the film, and as seen today. 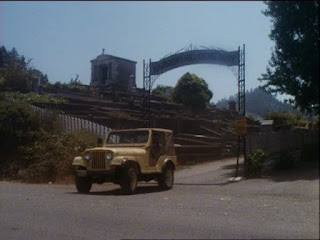 On Wednesday we went north to Redwood National and State Parks. We did a small hike in and out of the forest. On our way out, a black bear jumped in front of our car. For the next six hours we drove up the coast on HWY 101, taking in beautiful ocean sights all the way. On the route we picked up Del Norte County, our last county in California. We then crossed into Oregon, picking up Curry, Coos and Lincoln Counties. We stopped for lunch at The Crazy Norwegians Fish and Chips. The fish was excellent! At Newport  we said goodbye to the ocean and headed east into Benton County. We then turned north and headed straight to our hotel, the Hampton Inn Sherwood - Portland. We picked up Polk County (as well as some Wendy's hamburgers) along the way.

On Thursday morning we left our hotel and headed straight for Multnomah Falls. After touring the Falls, we went east on I-84 right into Hood County, our last county in Oregon, as well as the last new county on our trip. We then crossed over the Columbia River again (for the last time on the trip) and found ourselves back in Washington. We then went straight to the Ape Cave Interpretive Site, which is part of the Mt. St. Helens National Monument. There was a surprising number of people there considering that it was located in the middle of nowhere. We spent about 90 minutes in the cave, exploring the lower tunnel all the way to the end. I had to get on my stomach to crawl the last several yards to the end. It was very cool, and the highlight of the trip!

From Mt. St. Helens we traveled further north to Mt. Rainer National Park. It was too cloudy to see the peak. But we did see some waterfalls and a deer. We then spent the night at the Hampton Inn & Suites Tacoma-Mall.

On Friday we drove to Olympic National Park. It was quite a drive to get there. When we arrived, we took a walk through a rain forest. We then spent the night at the Hyatt House Seattle/Downtown - conveniently located across the street from the Space Needle.

On Saturday morning we went up in the Space Needle to take in the views from the top. Once we left, we went to North Cascades National Park. If you get there, be sure to take in the beautiful sight of Lake Diablo. Pictures do not do it justice. On our way back to Seattle we stopped for dinner at the Train Wreck in Burlington. We'd eaten there in 2014, and found the food to be great. Nothing has changed. We spent the final night of a great trip at the Tru By Hilton Tukwila Seattle Airport. 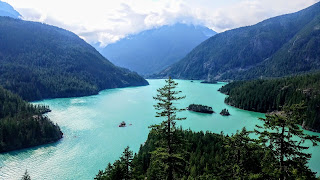 When it was all said and done, we'd picked up 41 new counties, and finished three states. We also visited several National Parks and National Monuments along the way. So what's next? We have a trip planned for October which will take us to Tulsa and beyond stay tuned!